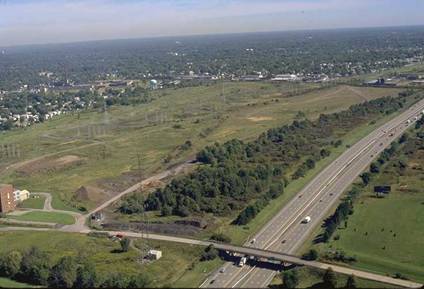 The Town of Tonawanda acquired various tracts of land in the 1930’s, 1950’s and 1960’s which came to be known as the North Youngmann Commerce Center. Records indicate the first acquisition occurred on February 27, 1930 from the Consolidated Aircraft Corporation for $667.80. A substantial tract of land was purchased from Erie County on January 25, 1956 for $12,100 and this land was formerly owned by John Pirson. This purchase added to an area already owned by the town. A small piece from Pearce and Pearce Company on March 28, 1968 for a sum of $1.00 was acquired. Two more parcels owned by MIL-ENS Development Company were acquired on March 24, 1965 and March 19, 1967 again for a sum of $1.00. Another small piece from Erie County was obtained for $1.00 on March 8, 1968.

The area is situated north of the I-290 between Two Mile Creek Road and the railroad tracks west of Military Road. The overall area of the current site is 105.79 acres however, since the 1930’s, the town waste recovery operations have occupied the western 19 acres of the site leaving a balance of approximately 86 acres vacant. In 2002, the town demolished the old municipal solid waste incinerator which had been dormant since 1982.

One of the major events that would influence this site occurred in the early 1960’s when the NY State Department of Public Works constructed the Powerline Expressway. As part of this project, approximately 40 acres were used as a soil borrow to construct the elevated portion the expressway. It is purported that the state paid the town $40,000 for this soil. This excavation left the site without a topsoil covering and it did not take long for the nickname “Mudflats” become an enduring moniker.

Over the decades various other public works operations have occurred on the site to include the construction of a large 24” water transmission line, the construction of a 36” sanitary sewer and later an upgrade and relocation of the sanitary sewer in 1996. The land has also been utilized for access to the town’s inactive solid municipal waste landfill which is landlocked to the north and it has also been used as a primary staging area for highway department operations to include temporary staging of stumps, wood chips, leaves, soils and road millings.
Since the 1970’s the town has always had a keen interest in bringing the site into productive tax rolls. In 1979, the town applied for a Public Works Program grant seeking $793,800 to construct infrastructure in what was known as the Power Line Industrial Park and over the next thirty five years attempted to find adequate funding to construct the needed infrastructure that would lend itself to fostering the site’s economic development.

As time progressed, environmental factors influenced the site either due to the previous incinerator operations, a brief investigation of possible FUSRAP detection, later dismissed, and the adjacency of the landfill and its closure operations and most recently the presence of wetlands that are under federal jurisdiction.

Located immediately adjacent to the Youngmann Highway (I-290), the 70-acre park offers an ideal setting for office and light industrial tenants. Excellent visibility and proximity to highway interchanges mean convenient access to markets throughout the Buffalo-Niagara region, and access to a broad base of employees. The NYCC is designed with sustainability in mind, including a conservation area along Two Mile Creek and a network of trails that lead to the beautiful Niagara River, one mile away.

We welcome First Source, LLC as our first tenant! The leading packager and distributor of confections, nuts, and specialty foods is constructing a 310,000 sf. building at the eastern end of the park. In addition to manufacturing and distribution, the project will host corporate headquarters for First Source.

The Town of Tonawanda has constructed the new road named Pirson Parkway which includes our first roundabout. The road intersects Two Mile Creek Road, passes over the Two Mile Creek Greenway and the creek itself, intersects at East Park Drive with the new roundabout and extends into the site ending at a cul-de-sac. The road was completed in 2015 ands includes waterlines, sanitary sewers and drainage systems. Other utilities available are natural gas from National Fuel Gas, electricity from National Grid and Telecommunications from either Time Warner, Fibertech, Verizon or Transwave Communications.