The Town of Tonawanda Veterans Memorial, located in Walter M. Kenney Field in the Town of Tonawanda, New York, is dedicated to the 43 million United States Military Veterans who have served and continue to serve our nation in times of war and peace. Construction of the memorial took roughly eight weeks and was completed in mid-August 2009. Watch the YouTube Dedication Video.

The Town of Tonawanda Veterans Memorial project began in 2004 as a grassroots effort to establish a permanent site in the Town for young and old to gather and pay tribute to their relatives, friends, and fellow Americans who were so committed to the ideals of the United States that they sacrificed their freedoms for the sake of all.

In May 2007, a group of volunteers initiated fundraising efforts for the memorial project. To date, hundreds of residents and business owners have contributed both financially and through volunteer efforts to make the memorial a reality.

Walter M. Kenney Field was the chosen site for the memorial for its ease of access and long-standing military connection thanks to the Korean War-era Grumman F9F-6P Cougar Naval airframe that has been on display at the field since 1959.

The memorial itself was designed around a 7-foot V-shaped granite monument, standing for Veterans. The sculpture is the creation of artist and Vietnam veteran Ralph Sirianni. Granite plaques affixed to the memorial wall bear the names of hundreds of veterans categorized according to their branch of service.

With the flag of the United States, the POW/MIA flag, and the honored flags of our Military Services proudly flying overhead, the Town of Tonawanda Veterans Memorial sends a silent but powerful message of patriotism throughout the Town of Tonawanda community and beyond. For generations to come, this memorial will serve as a symbol of national pride and a fitting visual reminder of the sacrifices made by the men and women of the United States Military.

How you can help
You can contribute to the upkeep and expansion of the Town of Tonawanda Veterans Memorial project by making a monetary contribution of any amount. 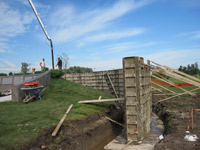 Those donating $100 may opt to have the name of a veteran who has served in the Armed Forces engraved on the memorial wall. Donors contributing $1,000 may have a tree dedicated in honor of a veteran at the memorial site. Donations can be made online.

Expansion
Veterans Memorial Expansion
Expansion of the Veterans Memorial began on Monday, June 7, 2010 and was  completed in early August, 2010.  This expansion allowed the addition of over 2,000 additional names.  Donations are still being taken for all branches of the service for engraving, trees and benches.
VETERANS MEMORIAL REGISTRATION FORM