This 3.9 mile trail is composed of two segments on top of a former railroad bed in the Town of Tonawanda and the City of Tonawanda.  The railroad corridor was operated for both freight and passenger service dating back to the 1880's. Two track systems were in place.  A westerly set of tracks was primarily operated for passenger and freight service by a succession of companies beginning with New York & Erie Railroad Co., thru the Erie-Lackawanna railway to 1968.  The International Railway Company operated passenger service between Buffalo and Niagara falls from about 1918 to 1937 on the easterly set of tracks.  In 1988, the NFTA acquired the right-of-way from the Consolidated Rail Corporation thru New York State legislation.  This trail is contracted atop the westerly railroad bed. 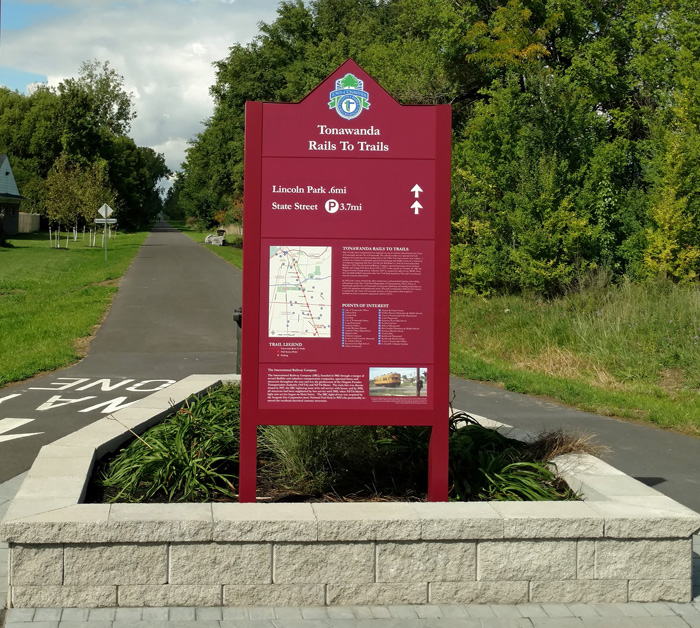 The Town of Tonawanda Youth, Parks and Recreation Department is now accepting applications for individuals wishing to purchase memorial plaques along the Town of Tonawanda Rails to Trails.  Bronze plaques with room for up to four lines can be ordered at a fee of three hundred dollars.  Dan Crangle, Councilman and Chairman of the Youth, Parks,and Recreation Committee stated that, “plaques can be purchased for a limited number of existing benches located along the trail, as well as numerous trees”.  Applications are available at Youth, Parks and Recreation facilities as well as the website.